#MIKEVANEKSUCKS The Blog: Blind Illusion "Straight As The Crowbar Flies" 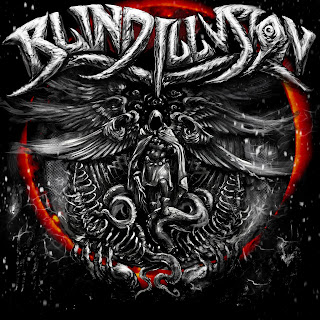 When I was an early teenager listening to Bay Area metal I spent the weekend with my family in my hometown of El Sobrante California and my Uncle John turned me onto a band called Blind Illusion which featured a very young Les Claypool from Primus. These guys were awesome when I was younger my Uncle proclaimed as he was sitting behind his drum kit. My Uncle was my hero so any band he told me about I jumped at the opportunity to learn about them. As the years went on I became addicted to the Blind Illusion's album "The Sane Asylum and it became one of my favorite albums of all time and especially the talented guitar work and lyrics of one Mr. Mark Biederman.  The godfathers of technical progressive metal or Hippie stoner metal Blind Illusion set the standard for how a progressive metal band should sound. 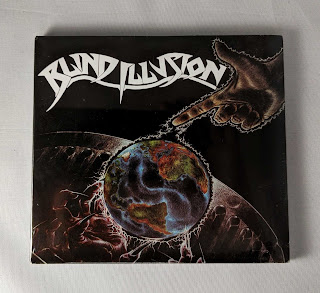 Fast forward a bunch of years to when I was booking shows for 209Productions in Modesto California. I had a show at the legendary Fat Cat Music House & Lounge with the Bay Area Stalwarts SKITZO! Skitzo frontman Lance Ozan called me and asked me a simple question, "Hey can we bring BLIND ILLUSION with us?" and I shot outta my chair in excitement and screamed "FUCK YEAH YOU CAN BRING BLIND ILLUSION WITH YOU!!" and after that, I would book the pair many times including my annual festival THRASHOCALYPSE. 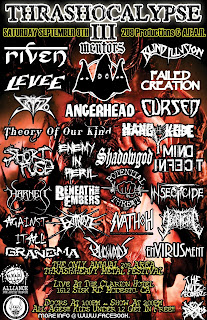 Blind Illusion has remained one of my favorite bands of all time mainly because of the connection with my Uncle and my friendship with Mark Biederman. Every so often I'll get a message from him on Facebook seeing how I'm doing and when is the next Thrashocalypse. Every time I get that notification that says Mark Bederman sent you a message it just makes me smile. 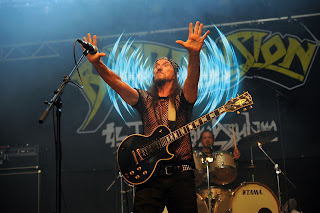 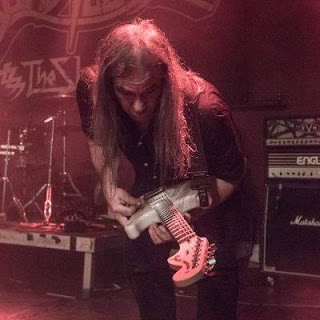 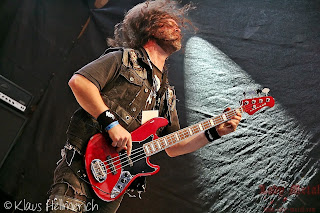 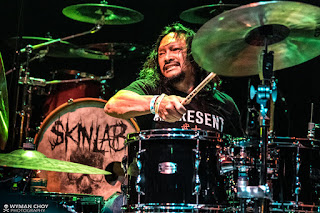 Blind Ill has evolved over the past few years which included a stint with Bay Area legend & former DRI bassist Harald O. The Current line up consists of Mark Biederman, Doug Piercy of Heathen,Angel Witch,Anvil Chorus & Control, Tom Gears of Ancient Mariner (Iron Maiden Tribute), and the latest addition to the group Bay Area Thrash legend and original DEATH ANGEL Drummer Mr. Andy Galeon. The band recently released the single "Straight As The Crowbar Flys" and it is a total rager!! A throwback to the days of straight-ahead thrash Blind Illusion takes us back to the hardcore gritty days of thrash metal that infiltrated clubs like the Stone and Ruthies Inn back in the day. I recently asked Mark Biederman about the new single. I asked, "What does this single mean to you and how would you compare it to other BLIND ILLUSION SONGS you wrote in the past??" Mark answered "Well the lyric is actually a true story about a woman named Sandy who was a great friend! However, when she drank alcohol she has Jekyll and Hyde syndrome. Sandy becomes the SandDemon. She actually threw a crowbar at me! It missed. This single is also a total collaboration musically of all of us even our newest member drummer/vocalist/writer Andy Galeon. With Andy, Blind Illusion is on a much higher plateau musically! This song could have easily been on the SANE ASYLUM"

All and all this is a great continuation of a great Bay Area thrash metal and I highly suggest that you head over to Spotify and get a listen to the latest single from the Legendary Blind Illusion! for more information please visit the band's Facebook page www.facebook.com/officialblindillusion or www.blindillusion.com 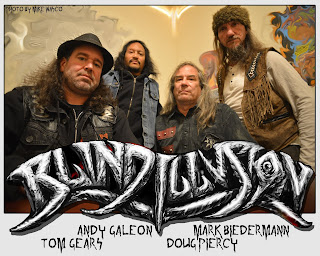 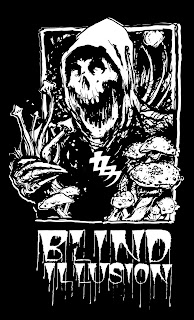 Popular posts from this blog

#MIKEVANEKSUCKS The Blog: A look at Forest of Jinn

#MIKEVANEKSUCKS The Blog: A Look at Forest of Jinn By Mike Vanek The Appalachian Mountains are as beautiful as it gets. It can also be a dark desolate place where you are Isolated from so society, Especially if you are kids that play black metal. Hailing from Wears Valley Tennesee Forest of Jinn is a Black Metal band that draws from the cold dark mountains of East Tennesee. Labeled as Apalacian Ritual Black Metal Forest of Jinn's music is dark, complex, and mesmerizing licks that transform into udderly intense Black Metal. The band's debut album entitled "Aag Ke Ped" is a throwback to the crusty depths of the origins of gritty black metal bands of days past. Released on Holloween of 2020, This 3 song EP that can be found on Itunes, Spotify, or wherever you download music is a devilish detour of your everyday norm that makes you contemplate life in a different hue of black... Starting as a solo project in 2016 Forest of Jinn resurfaced in 2019 consisting of Vocalist,
Read more

#MIKEVANEKSUCKS The Blog A look at Negative Sixxx By Mike Vanek When I set out to write this blog I wanted to expose the world to the best bands I could find. Well, one of those bands is Oakland California's NEGATIVE SIXXX!! The SF bay area has always been a breeding ground for awesome heavy metal bands and Negative Sixxx is no exception. With a super heavy sound that blends modern metal with thrash, this band is an all out attack on the senses! Made up of scene veterans Sid Frankosky on Vocals (StriktNyne, Desecrater, Jesus Crisis w/Harald O ex-DRI) Chris Van De Van on Guitar (Enemy In Peril, Silence Chair) Rick Chavez on Guitar (A Morbid Curiosity, Enemy in Peril, Rawn Wadley on Bass (Stormbat) and Mark Miller on Drums (Anisoptera) this band will wake up the neighbors and keep your head banging all week with ferocious riffs, a solid rhythm section, and absolutely killer vocals. When it comes to debuts Negative Sixxx came out swinging with possibly the best debut a metal band co
Read more

Mike Vanek Sucks
Mike Vanek is a 2 time Modesto Area Music Awards winning promoter and founder of 209Productions. Mike was also the metal view editor for Modesto View magazine as well as a stagehand and former production mgr for The MOONSHINE BANDITS Now he writes the #MIKEVANEKSUCKS blog!!